Where Is Cyber Fido Headed Next?

Robots have been a point of fascination and study for centuries as researchers and inventors have sought to explore the potential for automated technology. While there’s a long history of the development and creation of autonomous machines, mobile, quadrupedal robots — or four-legged robotic dogs — have seen a significant boom in the last few decades.

The capabilities of quadrupedal robots are being explored in a variety of fields, from construction and entertainment to space exploration and military operations. Today, modern robotic dogs can be purchased by businesses and developers to complete tasks and explore environments deemed too dangerous for humans. Read on for the evolution of robotic dogs and where they might be headed in the future, or jump to our animated infographic. 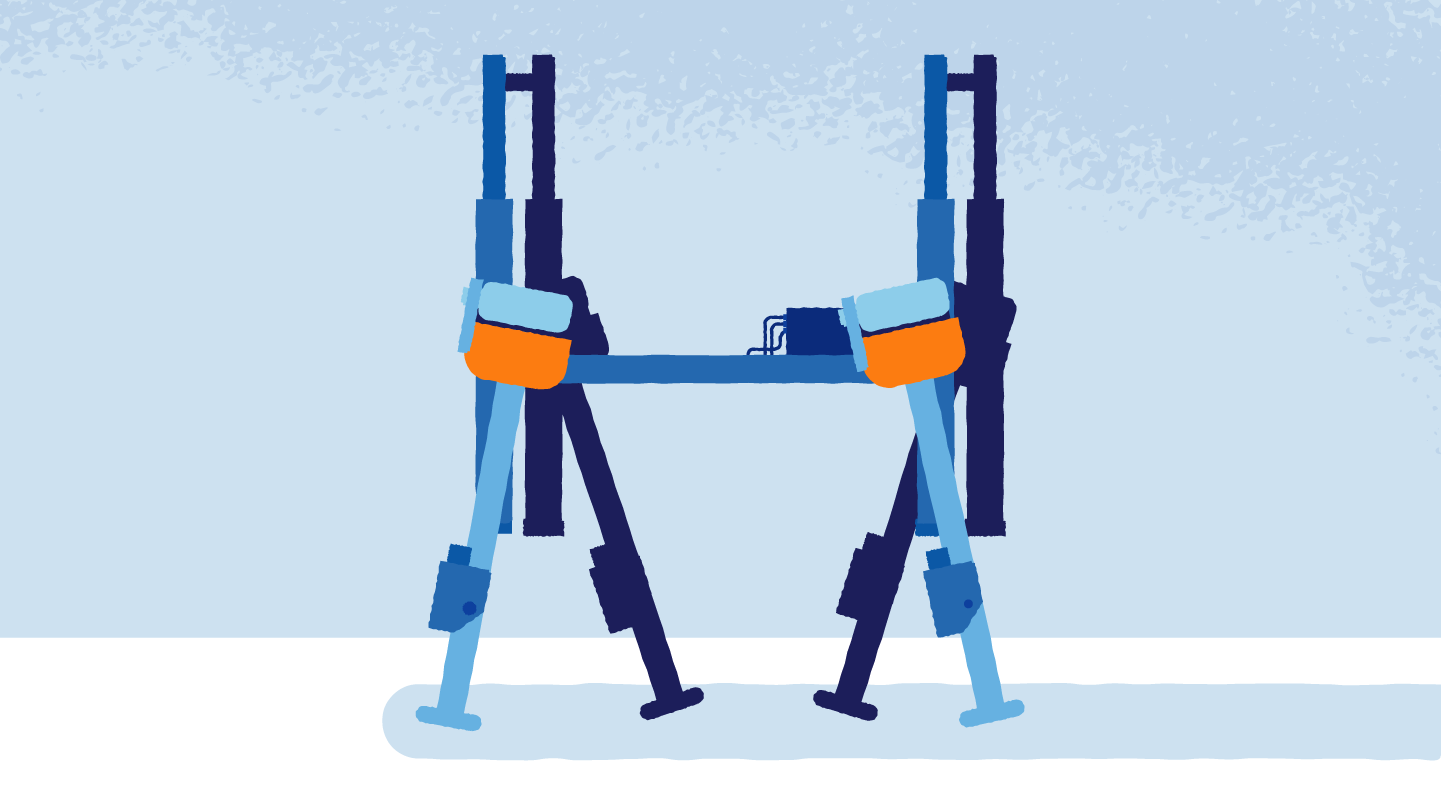 Although it technically mirrored the form of a horse, the Phony Pony was the first autonomous quadrupedal robot to emerge in the U.S. that set the precedent for robotic dogs of the future. Equipped with electrical motors, the Pony Pony had two degrees of freedom, or joints, in each leg (the hip and the knee) and one adaptive joint in the frontal plane. The hip and knee joints were identical, allowing for both forward and backward walking movements.

The Phony Pony was capable of crawling, walking, and trotting, albeit at a very slow speed. Thanks to its spring-restrained “pelvic” structure, it was able to maintain static vertical stability during movement. Since the Phony Pony was developed before the advent of microprocessors, it could only be controlled through cables connected to a remote computer in an adjacent building.

Use: Initial research and development of autonomous quadrupeds 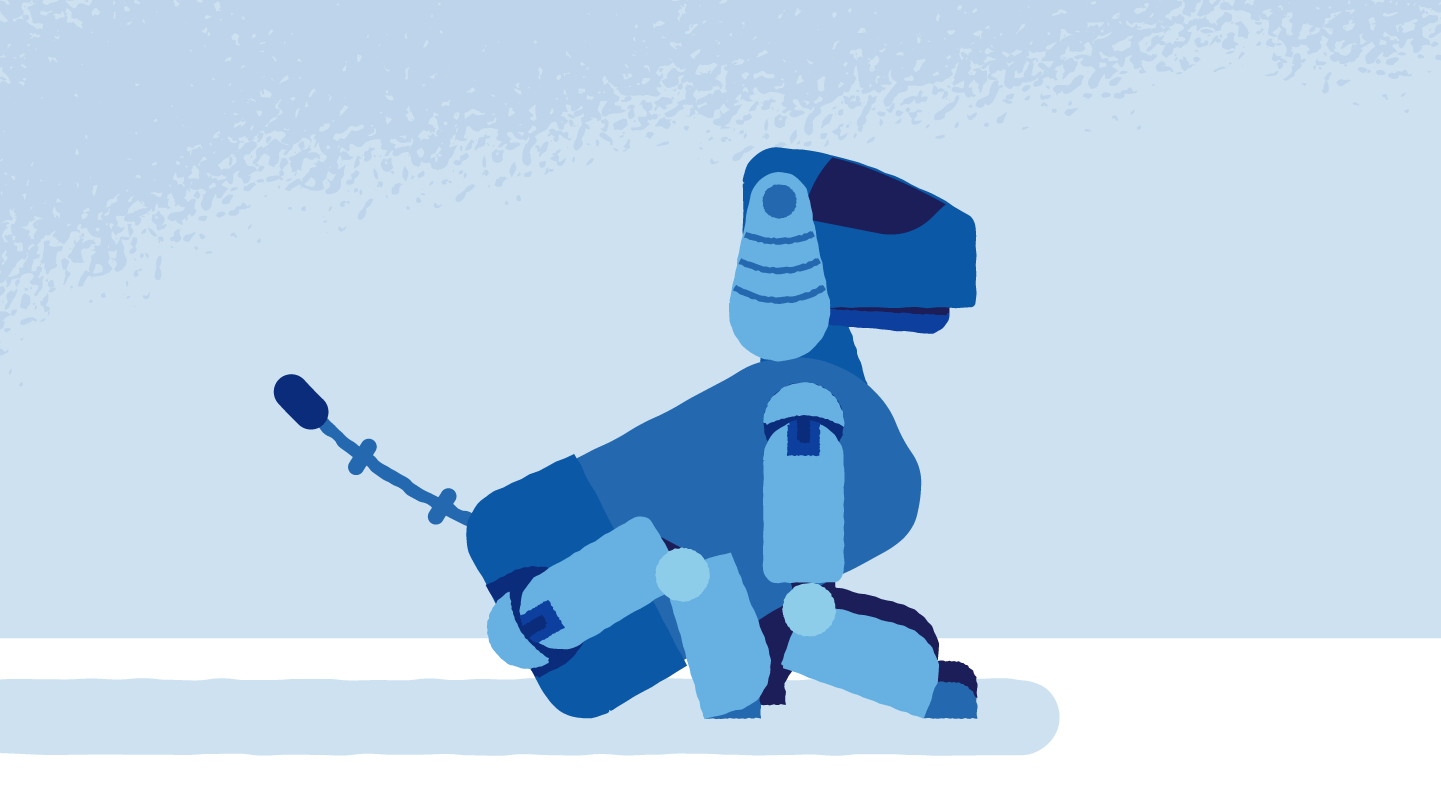 In the late 1990s, Sony’s AIBO  — one of the most iconic and advanced entertainment robotic dogs — hit the market. While the AIBO (Artificial Intelligence RoBOt) was constructed for entertainment purposes, its machinery is still highly complex.

Developed with touch, hearing, sight, and balancing capabilities, it can respond to voice commands, shake hands, walk and chase a ball. It can also express six “emotions”: happiness, sadness, fear, anger, dislike, and surprise. Its emotional state is expressed through tail wagging, eye color changes, and body movements, as well as through a series of sounds including barks, whines, and growls. Today, the AIBO has been used across many research groups for the purpose of testing artificial intelligence and sensory integration techniques.

Use: Toys and entertainment 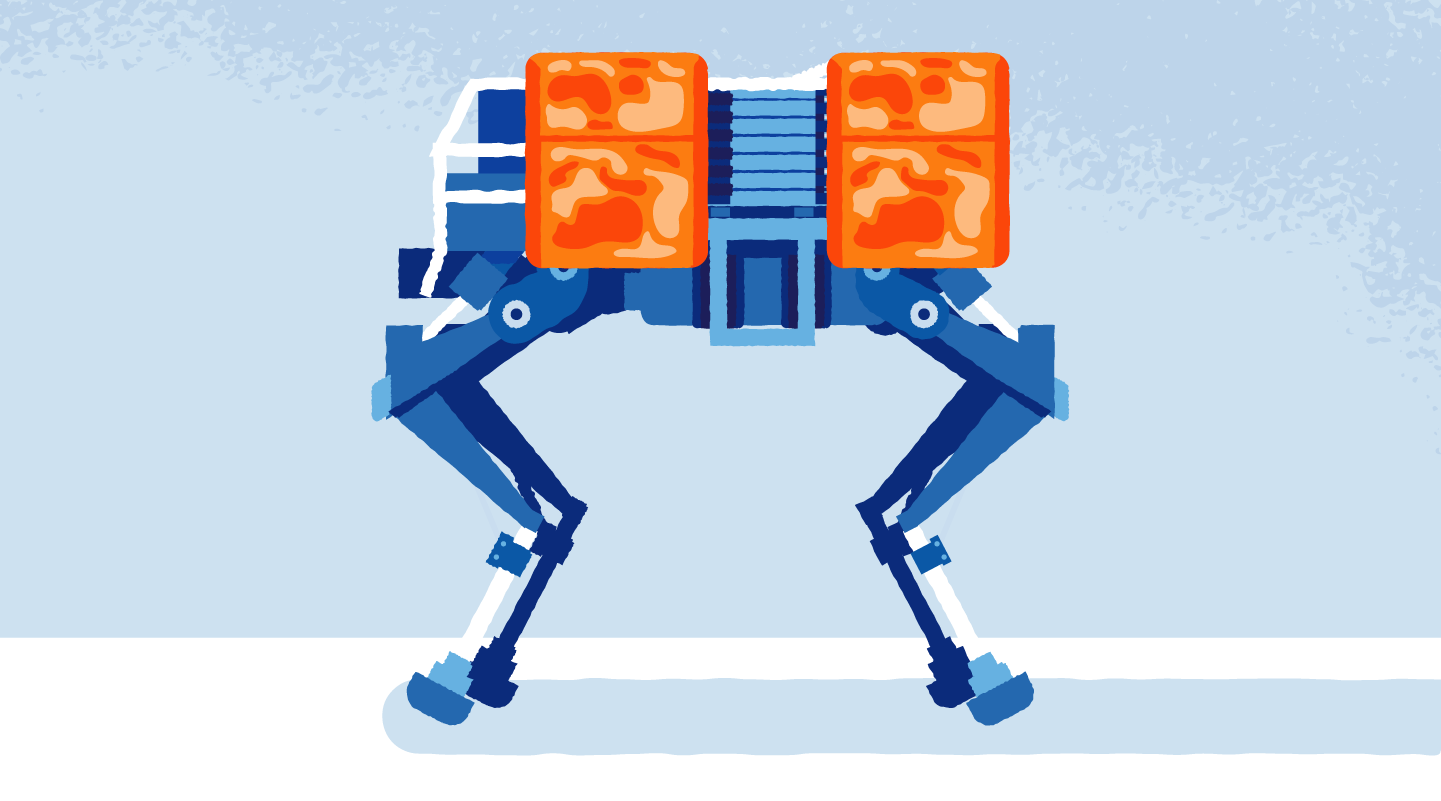 Boston Dynamics has become a leader in the world of robotics, specifically in its development of canine-inspired quadrupeds. Their first robotic dog, coined BigDog, arrived in 2005. Measuring three by two feet and weighing in at 240 pounds, BigDog was designed to support soldiers in the military. It can carry 340 pounds, climb up and down 35-degree inclines and successfully hike over rough terrains.

Each of BigDog’s legs has passive linear pneumatic compliance — a system that controls contact forces between a robot and a rigid environment — and three active joints in the knees and hips. The robot is powered by a one-cylinder go-kart engine, and its dynamic regulating system allows it to maintain balance. Its movement sensors embrace joint position, joint force, ground contact, ground load, and a stereo vision system.

In 2012, developers were still working to refine BigDog’s capabilities before plans to officially deploy it to military squads. However, the project was discontinued in 2015 after concluding its gas-powered engine was too noisy to be used in combat.

Use: Assist soldiers in unsafe terrains 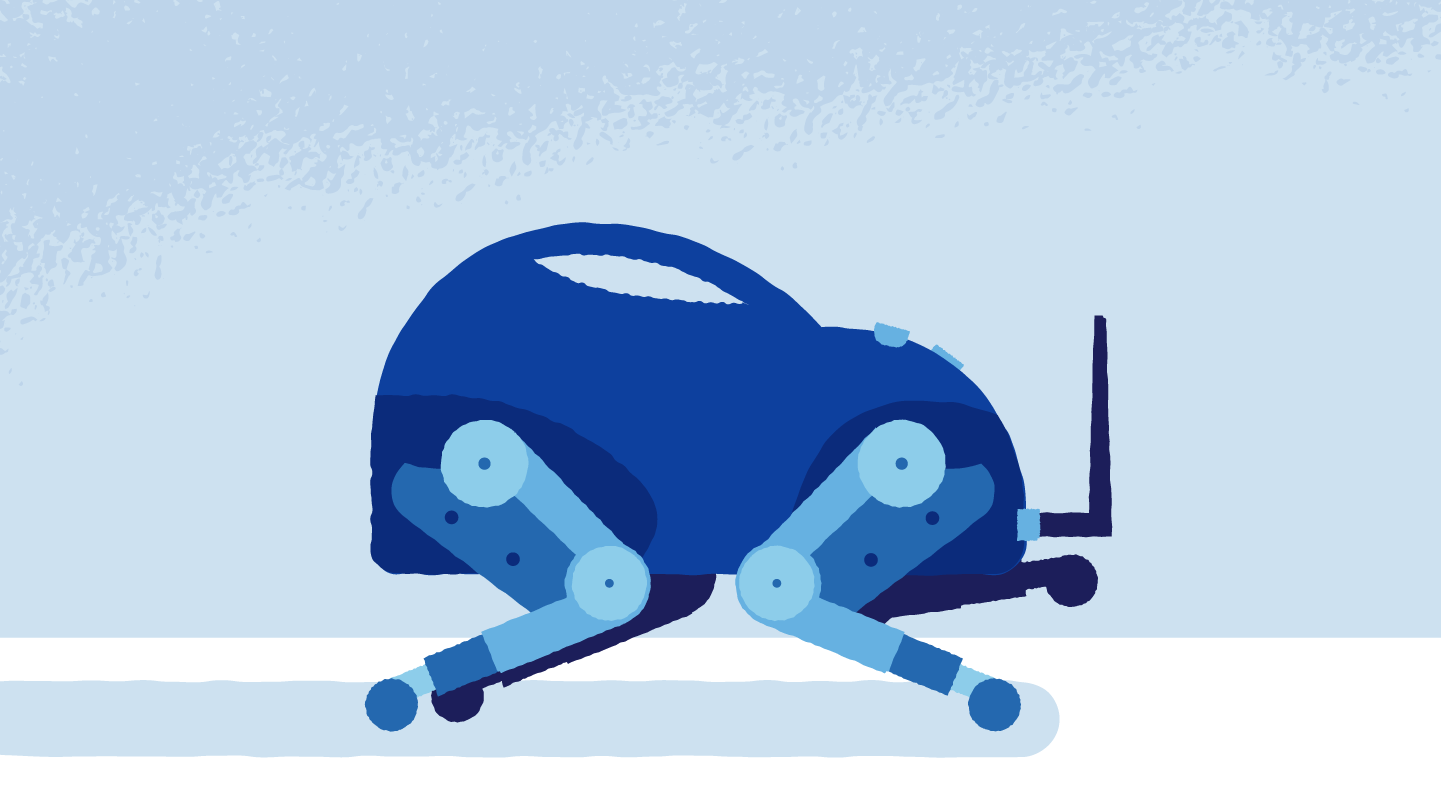 Each of LittleDog’s legs is powered by three electric motors fueled by lithium polymer batteries and has a maximum operation time of thirty minutes. The little dog maintains a large range of motion and is capable of climbing, crawling, and walking across rocky terrains. A PC-level computer placed on top of LittleDog is responsible for its movement sensors, controls, and communications. It can be controlled remotely and includes data-logging support for data analysis purposes.

Use: Research on locomotion in quadrupeds 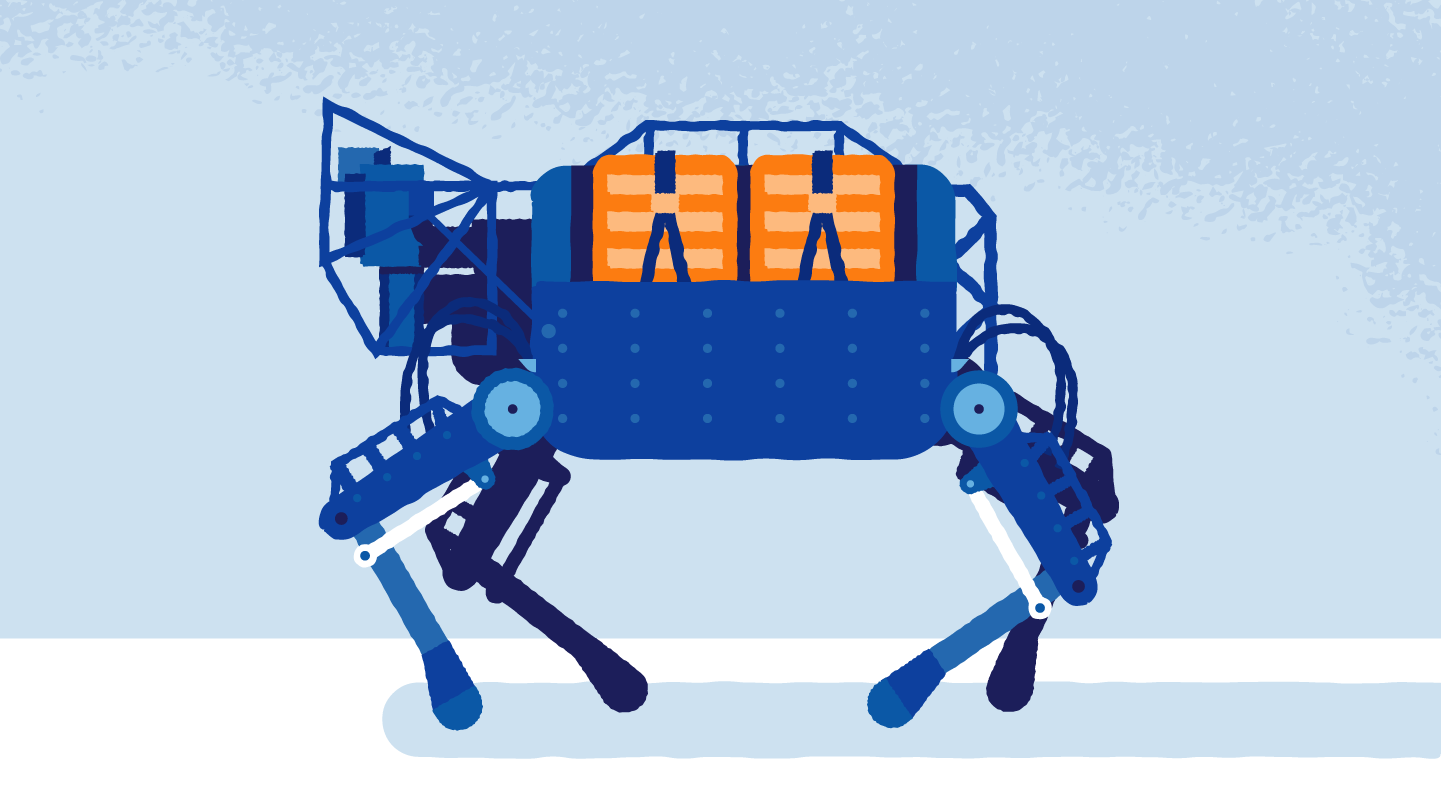 Continuing their efforts to develop military-grade robots, Boston Dynamics released AlphaDog Proto in 2011. Powered by a hydraulic actuation system, AlphaDog Proto is designed to support soldiers in carrying heavy gear across rocky terrains. It’s capable of carrying up to 400 pounds for as far as 20 miles, all within the span of 24 hours, without needing to refuel.

AlphaDog Proto is equipped with a GPS navigation and computer vision system that allows it to follow soldiers while carrying their gear. Thanks to an internal combustion engine, AlphaDog Proto proved to be quieter than its predecessor BigDog, making it more suitable for field missions.

Use: Assist soldiers in carrying heavy gear over unsafe terrains 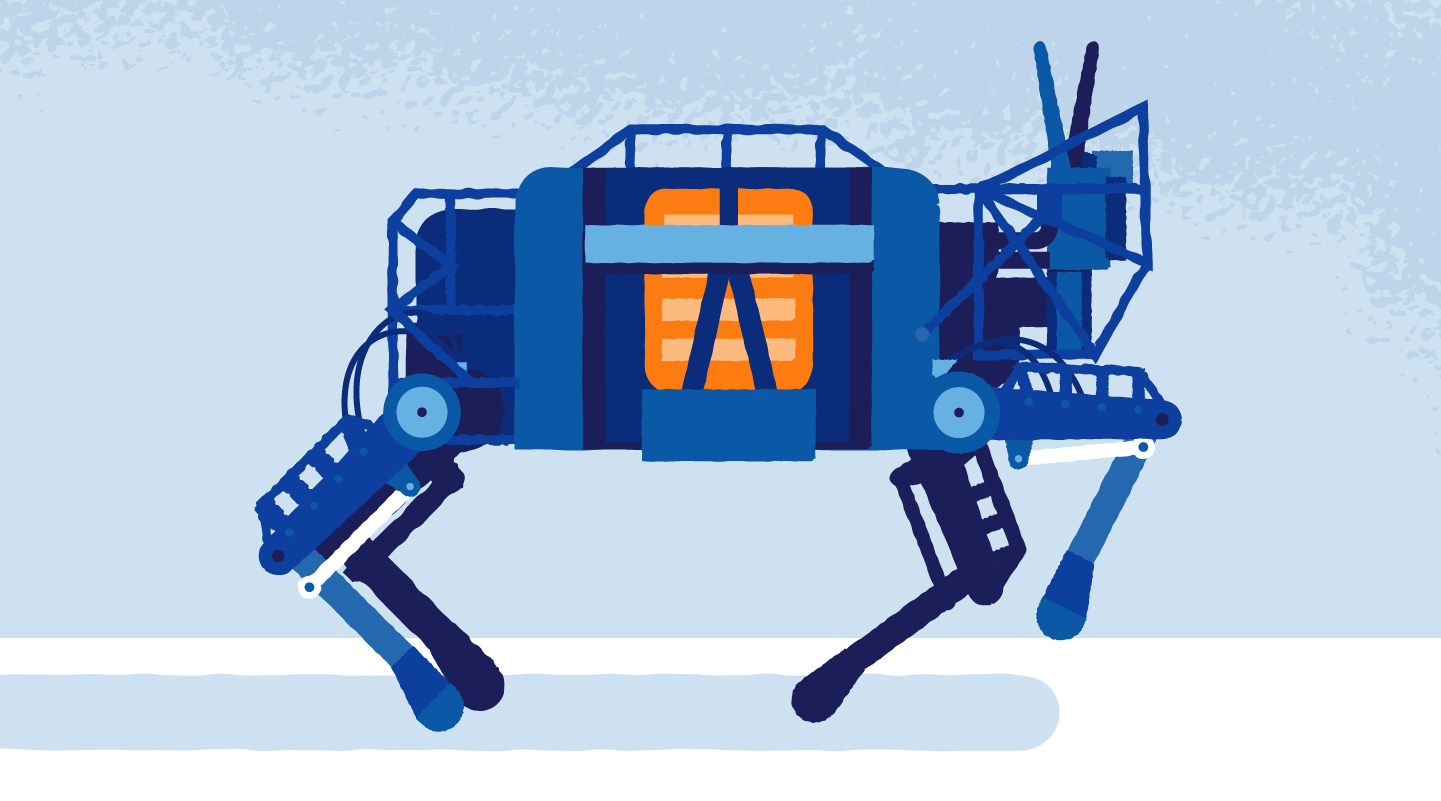 Boston Dynamics’ development of the Legged Squad Support System (LS3) came soon after the creation of BigDog in their efforts to continue refining their quadrupedal robots for soldiers and Marines. LS3 was capable of operating in hot, cold, wet, and otherwise unfavorable conditions. It contained a stereo vision system with a pair of stereo cameras, which were mounted inside the robot’s head. This operated in conjunction with a light-detecting and ranging unit that allowed it to follow a soldier’s lead and record feedback obtained from the camera.

Compared to BigDog, LS3 was around 10 times quieter at certain times and had an increased walking speed of one to three miles per hour, increased jogging speed of five miles per hour, and the ability to run across flat surfaces at seven miles per hour. It was also capable of responding to ten voice commands, which was a more efficient function for soldiers who would be too preoccupied with a mission to use manual controls.

Five years into development, LS3 had successfully been refined enough to be able to operate with Marines in a realistic combat exercise and was used to resupply combat squads in locations that were difficult for squad vehicles to reach. By 2015, however, the LS3 was shelved due to noise and repair limitations. While the Marines were ultimately unable to use the LS3 in service, it provided valuable research insights in the field of autonomous technology.

Use: Assist soldiers in carrying heavy gear over unsafe terrains 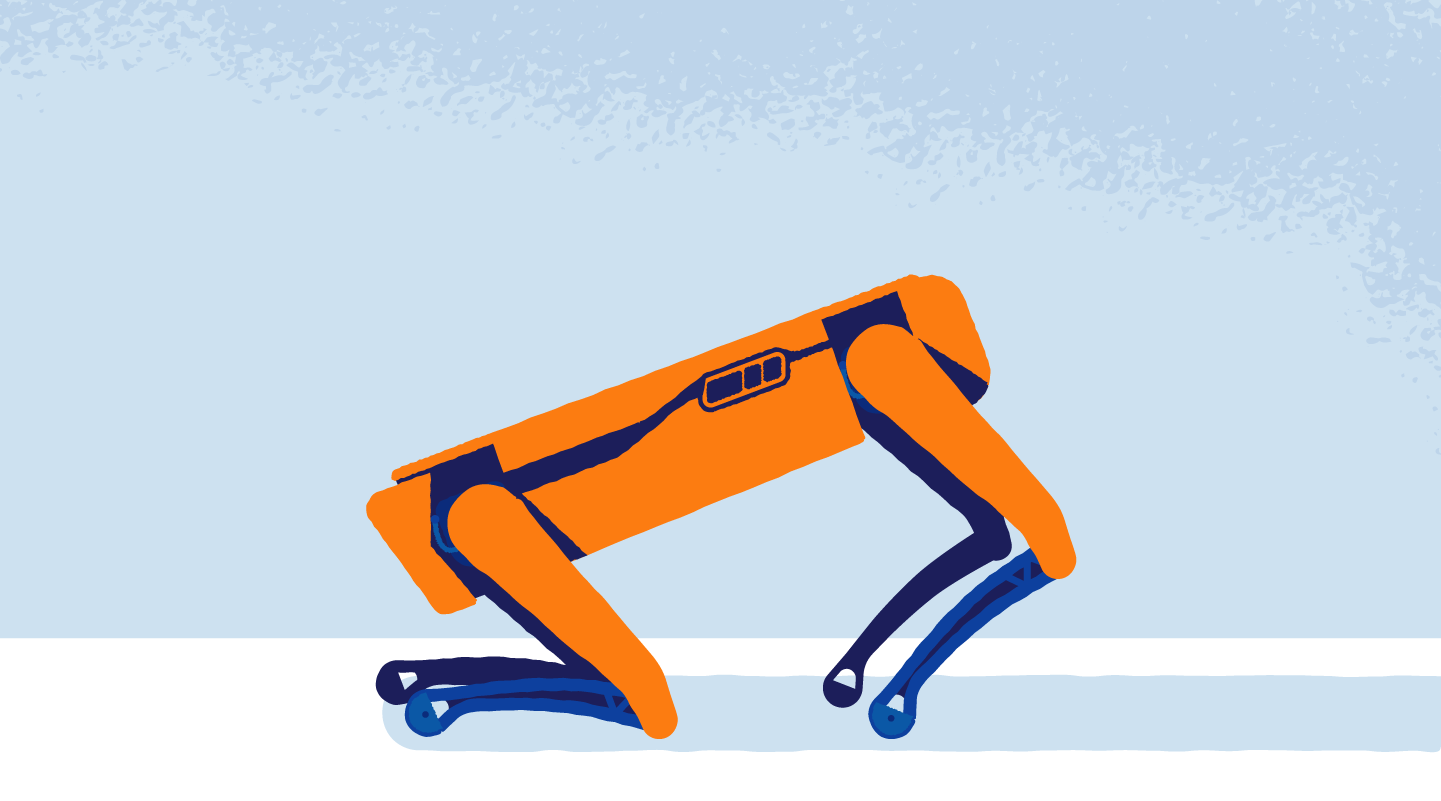 Spot is Boston Dynamics’ next creation in their line of quadrupedal robots, designed in an effort to move away from developing quadrupeds strictly for military use and instead move into more commercial use. The spot is significantly smaller than their previous models, weighing just 160 pounds. The spot is capable of exploring rocky terrains, avoiding objects in its path during travel, and climbing stairs and hills.

Spot’s hardware is equipped with powerful control boards and five sensor units on all sides of its body that allow it to navigate an area autonomously from any angle. Twelve custom motors power Spot’s legs, gaining a speed of up to five feet per second and operating for up to 90 minutes. Its sensors are able to capture spherical images and also allow for mobile manipulation for tasks such as opening doors and grasping objects. Spot’s control methods are far more advanced than Boston Dynamics’ earlier robots, allowing for autonomous control in a wider variety of situations. 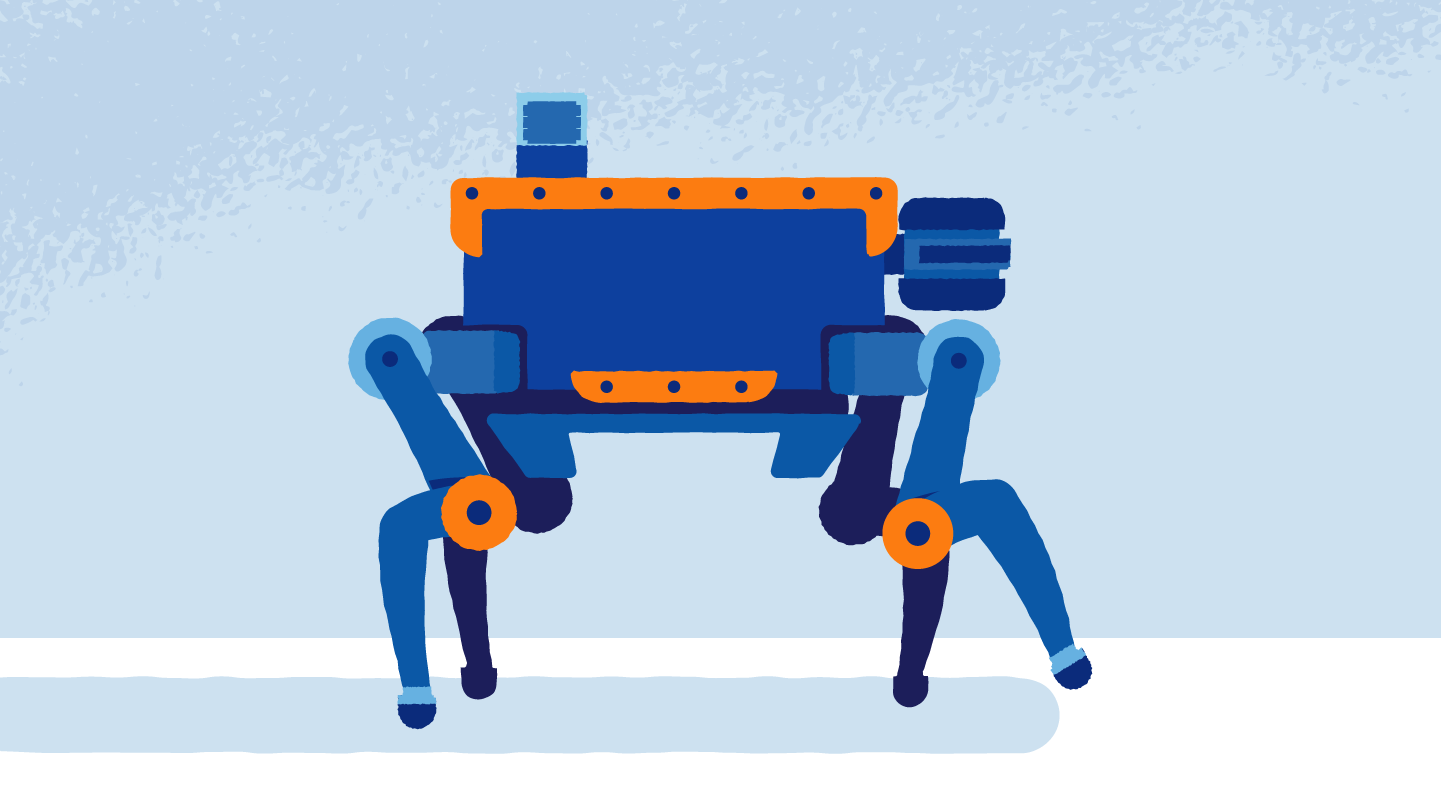 While Boston Dynamics had been the main leader in quadrupedal robots since the early 2000s, Swiss robotics company ANYbotics came out with its own iteration of the robotic dog in 2016. Positioned as an end-to-end robotic inspection solution, ANYmal was developed for industrial use, specifically the inspection of unsafe environments like energy and industrial plants.

ANYmal is mounted with a variety of laser inspection sensors to provide visual, thermal, and acoustic readings. Equipped with an onboard camera, it’s capable of remote panning and tilting settings to adjust views of the inspection site. ANYmal is capable of autonomously perceiving its environment, planning its navigation path, and selecting proper footholds during travel. It can even walk upstairs and fit into difficult-to-reach areas that traditional wheeled robots can’t.

ANYmal has undergone a handful of development iterations since 2016 and is available for purchase as of 2021. ANYbotics is currently working on an upgraded version of the robot suitable for potentially explosive environments.

Use: Remote inspection of unsafe environments 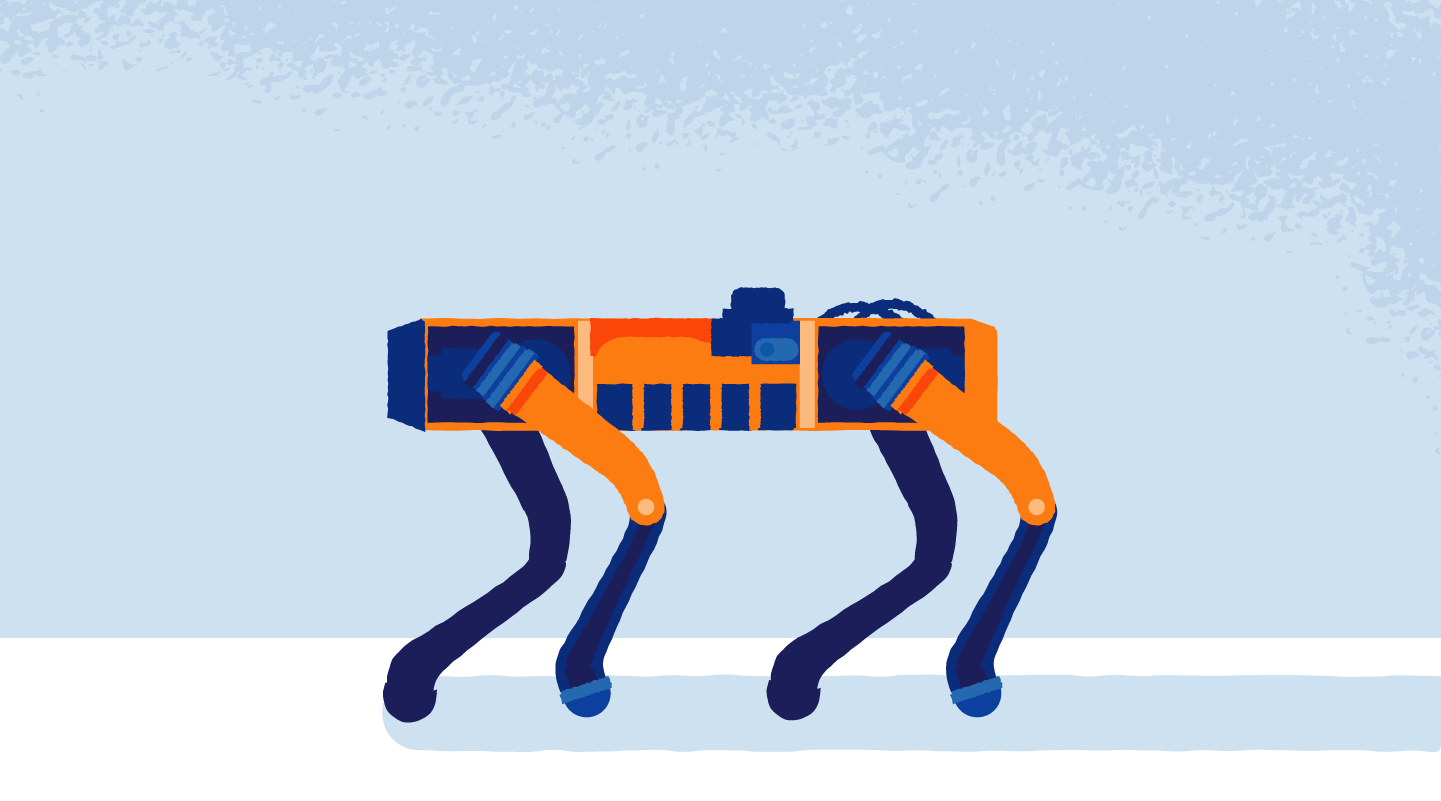 One of the latest developments in quadrupedal robots is Ghost Robotics’ Vision 60 robotic dog, which has recently been tested at the U.S. Air Force’s Scott Air Force Base in Illinois as part of its one-year pilot testing program. Built to mitigate risks faced by Air Force pilots, Vision 60 features a rifle mounted on its back contained in a gun pod and is equipped with sensors that allow it to operate in a wide variety of unstable terrains. It’s also capable of thermal imaging, infrared configuration, and high-definition video streaming.

Vision 60 can carry a maximum of 31 pounds and can travel at up to 5.24 feet per second. It’s considered a semi-autonomous robot due to its accompanying rifle; while it can accurately line up with a target on its own, it can’t open fire without a human operator (in accordance with the U.S. military’s autonomous systems policy prohibiting automatic target engagement).

Use: Military and Homeland Security operations 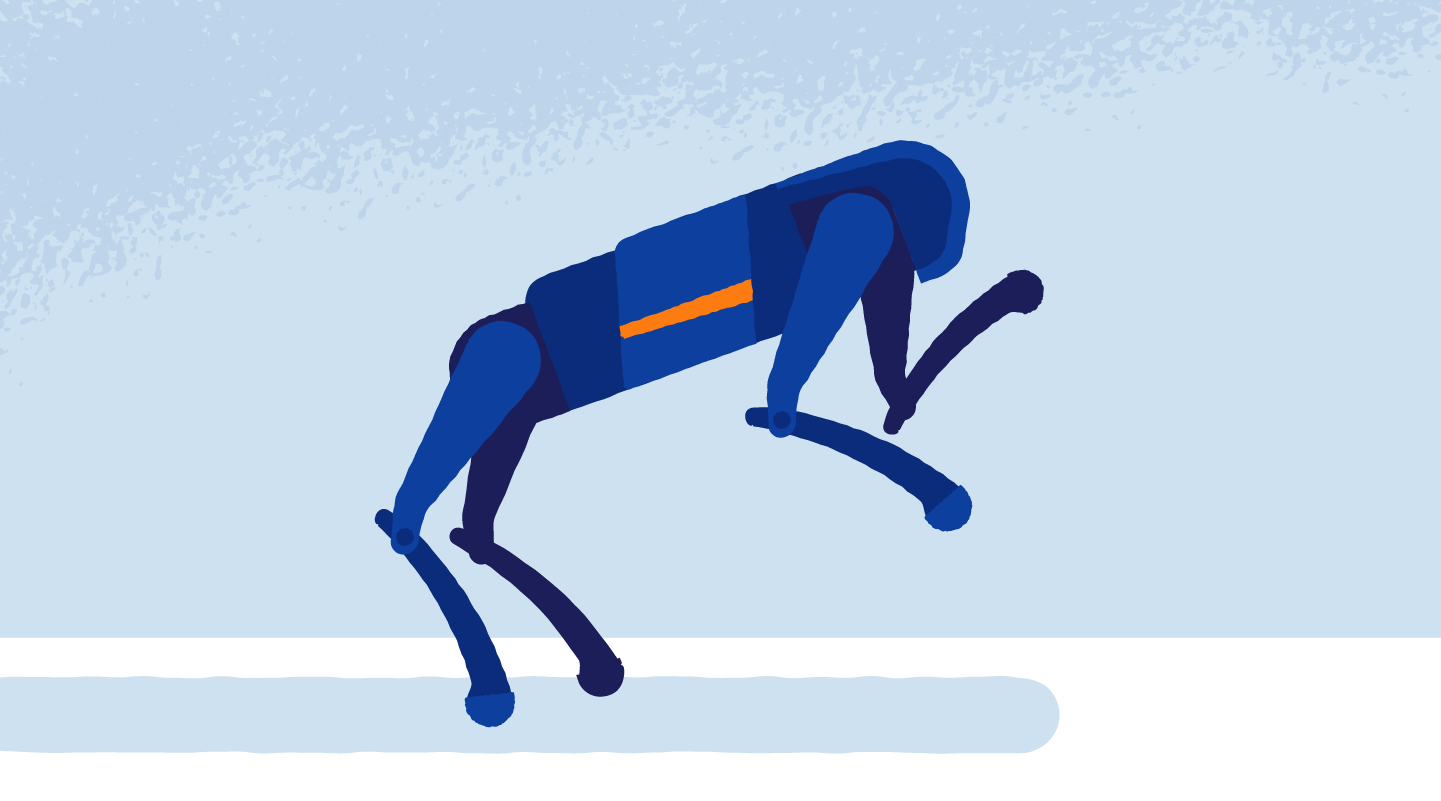 With more companies embracing the development of quadrupeds, Xiaomi Global followed suit and released their version named CyberDog. CyberDog is an experimental, open-source robot promoted as both a human-friendly companion and an asset by law enforcement and the military. CyberDog is sleeker and smaller than its other robotic dog predecessors, carrying a payload of just 6.6 pounds and running over 10 feet per second.

CyberDog is equipped with multiple cameras and image sensors located across its body, including touch sensors and an ultra-wide fisheye lens. CyberDog can hold 128 gigabytes of storage and is powered by Nvidia’s Jetson Xavier AI platform to perform real-time analyses of its surroundings, create navigation paths, plot its destination and avoid obstacles. CyberDog can also perform backflips and respond to voice commands thanks to its six microphones.

By making CyberDog an open-source project, Xiaomi hopes to expand its reach into the future of robot development and innovation. Its open-source nature is meant to encourage robotics enthusiasts to try their hand at writing code for CyberDog, giving the project more exposure and bolstering Xiaomi’s reputation in the robotics community.

Use: An open-source platform for developers to build upon

While the market for quadrupedal robots is still in its early stages, interest is steadily growing in a wide range of industries. As for fears of robots pushing out the need for traditionally human-led jobs, these machines are more intended to support humans alongside their jobs rather than replace them outright.

On the other hand, privacy concerns associated with robots aren’t to be ignored. As with any tech-enabled device, hacking is always possible, especially for open-source robotic models that can put users’ personal information at risk. This applies not only to the quadrupeds discussed above but to more common commercial robotic systems like baby monitors, security systems, and other WiFi-connected devices. It’s important to ensure your home network system is as strong and secure as possible with a home antivirus platform.

Learn more about About Robotics Dog with RobotLAB

A nimble robot that climbs stairs and traverses rough terrain with unprecedented ease yet is small enough to use indoors. Built to be a rugged and customizable platform, Axel comes ready to operate, right out of the box. With flexible API tools for navigation and autonomy and an open payload interface, Axel can be a research tool for a variety of applications. 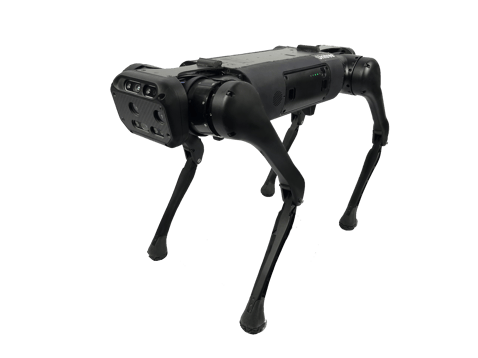 Sophie writes on behalf of Panda Security covering cybersecurity and online safety best practices for consumers and families. Specifically, she is interested in removing the barriers of complicated cybersecurity topics and teaching data security in a way that is accessible to all. Her most recent piece is on the evolution of robotic dogs and where they’re headed next.